The software utilizes a core GIS system (ArcGIS 9.1) and an application as a specific vertical extension of ArcMap for the management of road/highway networks. The core GIS application is a market standard, while ArcUtilities Strade, an application for the management of the Highways Register, has been developed in full compatibility with regional standards and in compliance with the Ministerial Directive of 06/01/01: “Methods for establishing and updating the Highways Register”.
The software allows the automatic insertion, consultation, visualization, continuous updating and export in different formats of the managed information. 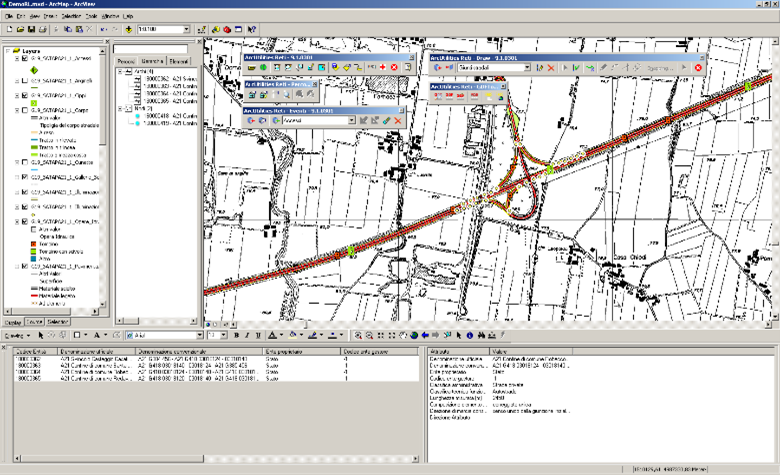 Playback of the video can be represented with a flashing dot on the map for easy identification of the point corresponding to the displayed images.
The application enables the user to obtain alphanumeric reports and detailed graphs, with prints also in scale and to intervene directly on the geodatabase with functions that allow the updating in real time of the data and therefore of the items.

Updating the data, both the graph and the associated attributes, allows the user to simplify and automate these operations.

All surveyed entities can be positioned using the traditional reference system of nominal roads on the route. Alternatively, user-defined reference systems (odometry, constructions) are available. The positioning tools allow you to position and insert new elements of a layer, on the current path, using four different progressive systems:

Finally, the software is provided with a Web extension, for the publication and consultation on intranet/internet of the geodatabases.